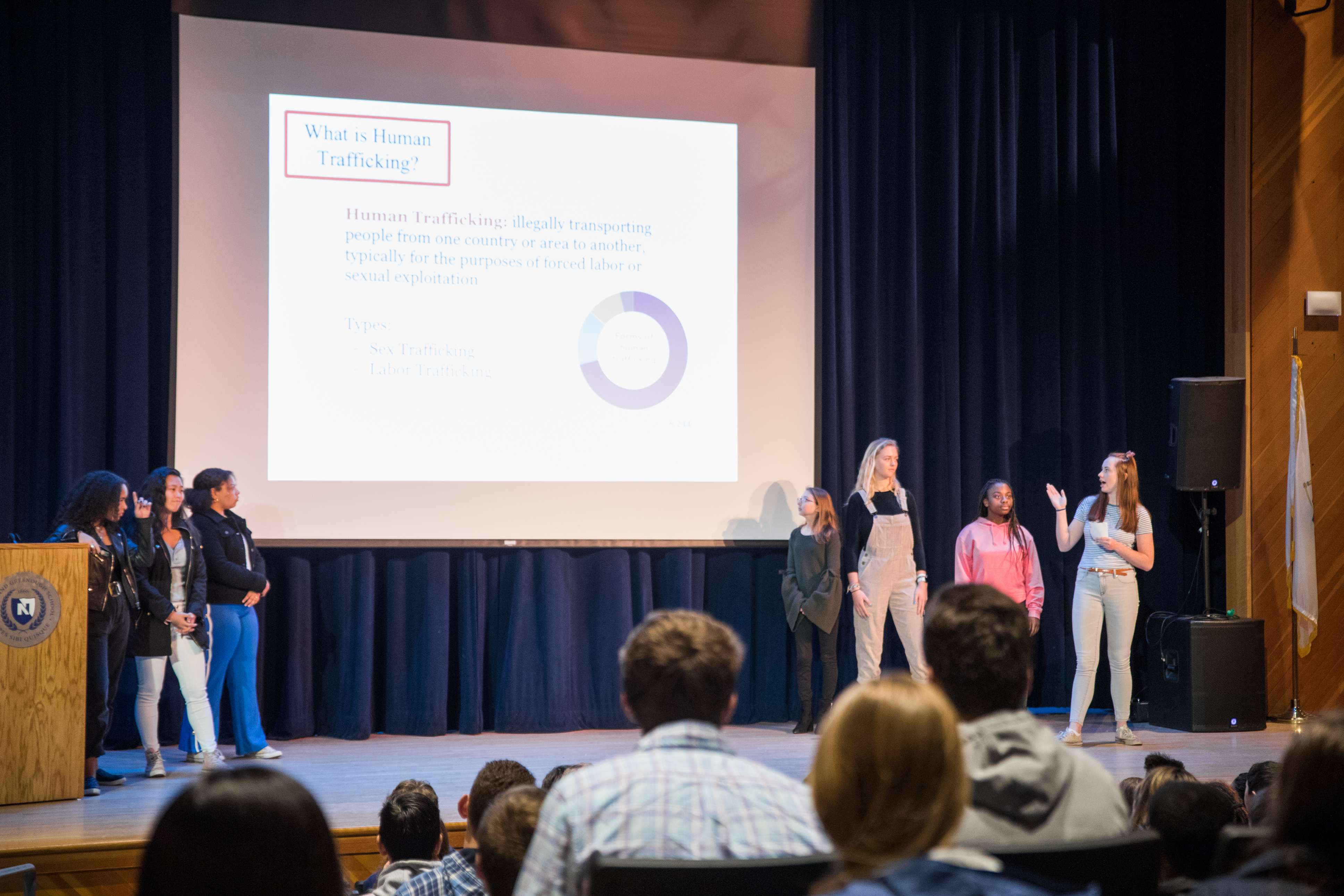 “This is humanity— you can’t degrade someone like that,” said Chief of the Human Trafficking Division of the Massachusetts Attorney General’s Office Beth Keeley, who battles the epidemic from the front lines.

Students in Jenny Carlson-Pietraszek’s Power & Inequality class and Ben Snyder’s War and Genocide class recently heard firsthand from Keeley, whose division goes after criminals who are selling other humans for profit. Both classes also heard the moving firsthand story of Jasmine Grace, a human trafficking survivor, author, speaker and recovery mentor. Grace’s non-profit, Bags of Hope, distributed more than 1,000 comfort/toiletry bags in 2018 to survivors getting back on their feet.

Carlson-Pietraszek explained, “Power & Inequality learned about human trafficking by reading articles, researching current data (globally, nationally, and regionally), and focusing on various action steps being taken to address the issue. Genocide learned about it as a common occurrence in the aftermath of genocide, and focused on the psychological tactics used by traffickers and the psychological effects on trafficked people. Both classes watched the documentary I Am Jane Doe prior to having the distinct honor of hosting Beth Keeley and Jasmine Grace. Meeting these individuals impacted our students deeply.”

Keeley’s visit was facilitated by Nobles’ new Director of Campus Safety Brian Canavan, with whom she worked in his previous role, running the Massachusetts police department’s gaming enforcement division from 2013-18.

As the daughter of a police officer and an emergency room nurse, Keeley grew up familiar with “intense situations,” and was always interested in social justice. Her desire to serve the community led her to Suffolk Law School, and started her legal career in Roxbury District Court. “I learned more in three and a half years there than in ten years anywhere else,” she said.

An early focus on domestic violence work helped Keeley to “better understand the issues for each individual. A solution that seems obvious to some (e.g. to “just get out”) is not easy.” She wanted to advocate for those unable or unwilling to speak out, and to bring them justice.

With the West Roxbury District Court Keeley worked on child abuse cases,and then more severe felony cases with the Superior Court, where she saw children targeted for commercial sexual exploitation. Many were victims of past sexual abuse, cycling through DCF custody, seeking love, acceptance and community. Traffickers exploited them, promising “opportunities and love,” Keeley said.

“Human trafficking has been around since humans have been around, but the state law I prosecute under was not put into place until 2012. In thinking about crimes and nuances of exploitation, I’m still learning,” said Keeley.

Her division has learned of countless illicit massage businesses (“IMBs”/brothels) through online ads. Since trafficking site Backpage.com has been dismantled, others have sprung up to replace it. Keeley and her team use investigative tactics to recover individuals from complex situations and to track down traffickers. They see patterns in the cases. Many young women come from China or Korea via a hub in Flushing, N.Y. using student visas to work and send money home to family. “Some know ahead what they’ll be doing, others don’t,” Keeley said.

Keeley described the trauma these women experience, compounded by an unfamiliar environment and a new language—then having to talk to law enforcement about the shameful way in which they support their families. Keeley admitted that the war on the sex trade is overwhelming: “Sometimes it feels like we’re drinking from a firehose.” But she also sees progress.

“We’ve gotten better at addressing the conversation; we now talk about it as human trafficking. You can’t sell another person, and you can’t sell your own body. The trafficking law carries a harsher penalty than pimping laws. It’s not a victimless crime, and we’re helping to raise awareness,” said Keeley.

Keeley says many victims feel they have no real choices, and struggle with drug addiction, prior abuse and poverty. “There is often underlying inequity; if people had the same opportunities, fewer would do this. In this ‘Robert Kraft moment’ – some people are trying to push back, saying it’s an opportunity for women to make money. But why is it an opportunity?” Keeley challenged. “Men with power perpetuate this with money. It’s not a truly consensual experience.”

To those who argue for the legalization of prostitution, Keeley argues, “It’s just setting in stone a way to entrench people in inequity.” Current immigration policies, she said, have escalated fear for victims, as they outstay their visas, giving traffickers more power over them.

In Keeley’s experience, victims need help, legitimate employment and resources for addiction and mental health. “We need to think about not criminalizing those people (not just women, but also men and teens) but encouraging them and providing support. Instead we are trying to hold traffickers responsible. The Nordic model of prosecuting the individuals buying sex instead of those prostituting is working.”

To Nobles students, Keeley said, “It’s revitalizing talking to people like you who are learning; I’m grateful for the opportunity.”

The following week, Jasmine Grace came to share her survival story with both classes. “I want to bring hope and healing, to have a real conversation,” she said. She explained that 80-90% of women in the commercial sex trade have been sexually abused as children; the average age of entry is 12-14. Of the 300,000 kids who go missing each year, one third enters the commercial sex trade. “When they emerge in their 20s and 30s it may seem to outsiders like they made that choice, when in reality, it’s not a choice at all,” Grace said. “Prostitution is not the world’s oldest profession but its oldest oppression.”

Grace explained how traffickers target and exploit vulnerable individuals. Grace’s mother struggled with mental illness and her father was emotionally unavailable; her brother was abused by a family member when he was only 10. Thankfully, Grace said, “I had loving, kind grandparents – I’m from a big, Italian family. I’ve met so many women who never received any love at all.” Around the age of 12-13, she started experimenting with drugs and alcohol, and she experienced sexual violence from an older boy when she was 14. She said because she never told anyone, it caused her to feel a lot of shame.

“We all search for love and attention as humans, but I was spelling love s-e-x. I carried shame and had a broken path early on,” Grace said. But at 18, she was working in a hair salon and studying journalism. “I had dreams,” she said. One night, a smooth talker with a fancy car swept her off her feet. As he became her boyfriend and met her family, he was grooming her for the sex trade. “He had been a breadwinner for his own single-parent family and had been hustling since he was a kid,” Grace said.

Her trafficker got her to trust him, then manipulated her. Around the same time, Grace reconnected with a high school friend who was selling sex and living a luxe material life. Grace’s boyfriend then talked her into doing the same; he first sent her to a massage parlor in Hartford, Conn.

Grace’s attempts to escape provoked her trafficker’s violence; she lived in constant fear he would use his gun on her. While working for him, she earned an associate degree in business to help him launder money. She worked hard at school, knowing “he couldn’t take that away.” He impregnated her, then forced her to terminate the pregnancy.

Meanwhile, she met a man on Craigslist with whom, surprisingly, she formed a platonic relationship. When she needed to establish her ability to rent an apartment, he created fake pay stubs to help. But getting on her feet was difficult, and she succumbed to oxycontin and then heroin to dull the pain.

In 2006, Grace’s brother died of a crystal meth overdose. It was her turning point: she confronted her own bleak fate, and resolved not to leave her parents without children.

For the past 12 years, Grace has been clean and sober. She became a Christian through Alcoholics Anonymous’ 12-step program. After five years in recovery, she was healed of the shame that the commercial sex trade brought, and began working as a mentor to at-risk teen girls at My Life, My Choice. She met her husband at church; she lit up speaking of their three children. Crediting the love and support of her community, especially those she met through AA and her church, she now lives with “forgiveness and compassion.” In response to students wanting to help, Grace suggested mentoring programs and supporting organizations doing the work, and learning the power of healthy relationships.

At the culmination of the two-week unit, members of the Power & Inequality class gave an assembly presentation to raise awareness about human trafficking, including the emotional manipulation tactics used by traffickers, obstacles victims face when they try to escape the sex trade, and what our community can do to stay safe and help protect others.