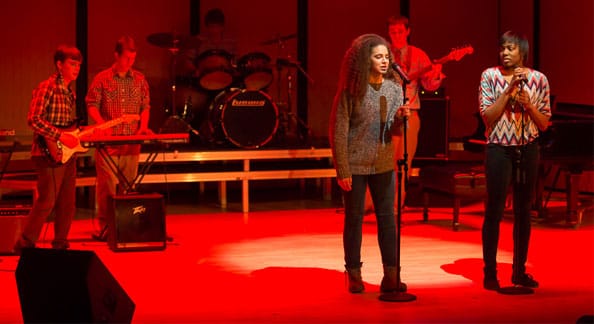 There are a handful of Assemblies that everyone looks forward to—and the Fringe Festival has quickly become a fan favorite. Thanks to a group of talented performers and the booth crew (who provided amazing sound, lighting and technical support) the March 6 Assembly was unforgettable.

There was a wide range of acts this year, including musical and rap performances, spoken word and a theatrical monologue. These words and photos (below) can't do the performances justice, but here's a quick run-down of the line-up: The performing arts department opened the show, with faculty member Jon Bonner demonstrating some impressive rap skills. After a spoken word piece by Tom Morrison, Belle Tuttle and Cyrus Veyssi accompanied band members to perform a spot-on rendition of  "Little Talks" by Of Monsters and Men. There were two moving duets—performed by sisters Olivia and Michaela Thompson and Katherine Paglione and Natalie Sellers, respectively—and a satirical number by duo Ben Perelmuter and Alasdair MacKenzie. Justin Jimenez, a.k.a. Ovaflow, made an appearance and  Lucas O'Brien performed a one-man skit. Several students took the stage the "Hobbit Song," before crooners Belle and Alex Maund ended the show.