The Art of Phalanx Formation 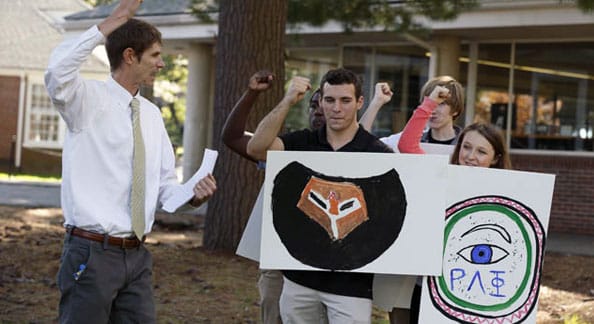 Students can read about ancient Greek warfare, but will they ever experience what it felt like for those soldiers to stand side-by-side, toeing the battlefield lines? For students in George Blake's Greek Civilization class, the answer is yes.

The class spent time hand-crafting shields, personalizing the design just as the ancient Greek soldiers had done. Then they headed outside to practice the phalanx, a military formation that was pivotal in the development of Greek warfare. Soldiers would stand close to one another, forming a tightly-packed group. They would overlap their shields to protect themselves and one another and descend on the enemy in one motion, trying to overpower the other side.

"It was a real shift from the previous emphasis on the individual in Greek society," explains Blake. "It speaks to the development of the polis."

Acting out the formation helps students understand the mechanics of the tactic and often raises questions and conversation they might not have thought to pose if they were sitting in a classroom reading about the tactic. They are also more likely to remember the details having had the chance to walk through it. The activity is a fun way for students to learn and experience for themselves ancient Greek history and culture.