The Importance of Civic Education 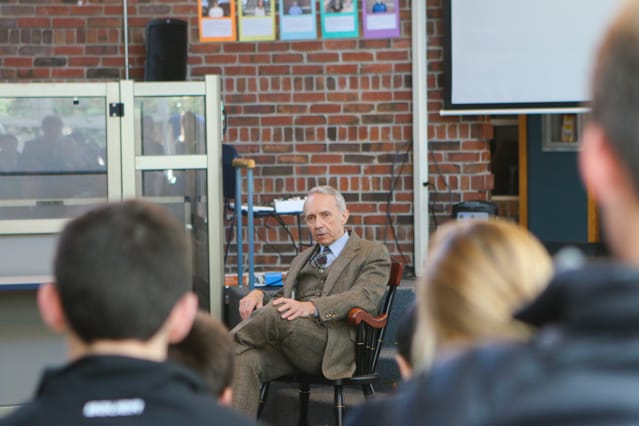 Souter discussed the importance of a civic education and its effects on the future of the U.S. government. He applauded Nobles students for studying civics and shared that up until a few years ago, civic education has been deemphasized in schools for 40 or so years. The correlation between the level of government knowledge and voting percentage is staggering. Voting percentages for the 18- to 30-year-old demographic is incredibly low.

Souter says that he’s not a pessimist and does not believe the U.S. government will fail like the collapse of Rome. “History does not repeat itself exactly, but it can give some very wise and valuable warnings,” he says.  “And when you look back at the Roman experience, history is giving us a warning. The warning is it may turn out bad if somebody doesn’t start doing something about it, and the people who have got to start doing something about it are the voters of the United States.”

Souter’s career began after graduating from law school. He aspired to be the kind of lawyer who “gave back to the community.” When one student asked, “Did you always want to become a justice on the Supreme Court?” Souter said, no, but shared that when he was appointed, many friends and family members said, “I always knew you were going to be on the Supreme Court.”

He advised students not to spend too much time planning their lives. “Make the best plans in the world that you can, which is what I did,” he says. “And then be ready to change them because you’re going to have experiences that open up opportunities that you didn’t think about.”