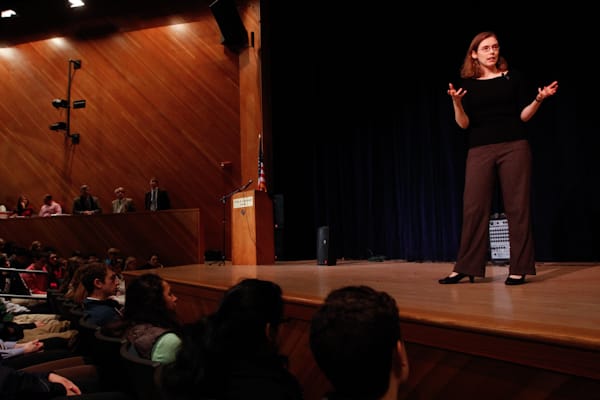 Author Madeline Miller visited Nobles on Wed., Nov. 28, to discuss her New York Times bestselling novel, The Song of Achilles, a project 10 years in the making. Her day began in Long Assembly, where the author and Classicist talked about her long-lasting love for ancient Greece, and its profound influence on her work. She traced her fascination back to when she was a child and her mother would read excerpts from ancient texts like the Iliad (which would become the primary inspiration for her novel) instead of traditional bedtime stories. She loved the epic adventures, and decided there was more story to tell.

Using the Iliad as her focal, starting point, Miller wanted to both re-tell and re-imagine the Trojan War. Song of Achilles focuses on one of the War’s most notable and acclaimed soldiers—Achilles himself—and his relationship to Patroclus, a longtime companion who plays a subtle, but impactful role in the Iliad. The book combines all the epic components (the wrath of the gods and goddesses, war, conflict, jealousy and turmoil, to name a few) of its ancient predecessors with the details of the central love story.

After Assembly, Miller spent the day visiting classes, a natural fit for the former high school teacher and tutor. Her first stop was at the Middle School, where she fielded questions from English Via Latin students. Class VI students asked about everything from the writing process (Miller said she works well “writing in spurts,” and values really good editing) to her best piece of advice for aspiring writers (“The best thing you can do to be a better writer, is to be a better reader.”) They discussed her decision to write in the first person (Patroclus) and alternate endings she considered along the way. Many students were fascinated by the fact that Miller admitted to throwing out her first draft, which took almost five years to write, and "starting from scratch." When asked about that decision, she say wanted to write a book that was accessible; she wanted people who were interested in the Classics to enjoy it, but not feel like they had to know everything about Greek mythology to understand it. Her first draft missed the mark, she said.

Miller says that she is surprised by the success of her first novel, but thrilled that the story of Patroclus and Achilles is finally out there. “The story itself is why I kept pushing,” she says. “There were times I thought about giving up, but I felt so passionately about the story itself. I’m happy people enjoy it.”

To learn more about Miller, or her novel The Song of Achilles, visit http://www.madelinemiller.com.