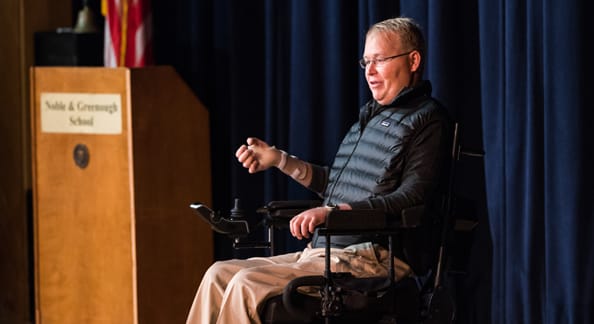 Hockey player Travis Roy achieved and lost his dream in the span of 11 seconds. The Tabor alumnus, who won a scholarship to play for the Boston University Terriers, was tapped by Coach Jack Parker on October 20, 1995. The moment was the fulfillment of his goal to play Division I hockey and a step toward—maybe someday—playing pro or becoming part of the Olympic team.

After just 11 seconds of wearing #24, he slid into the boards and suffered a spinal injury that left him a quadriplegic. “That’s the challenge that chose me,” he said to students and faculty at long assembly. “It’s what we do in the face of these challenges that defines who we are.”

As he told the Nobles community on January 24, that day more than 20 years ago changed him for ever; it also served to clarify his identity and values and led him to establish the Travis Roy Foundation, which supports people with spinal injuries. Half of the money raised by the foundation goes toward quality-of-life grants to purchase adaptive equipment to help paraplegics and quadriplegics, while the remainder supports research. In addition to his philanthropy, Roy is a motivational speaker.

Roy recalled that his earliest memories were of playing hockey in Yarmouth, Maine, where his dad coached and managed a rink. He first wore skates at 18 months. As a young teenager, he listed his goals and shared them with his parents, who smiled and reminded Roy that playing DI hockey would require him to keep his grades up. Roy, who is mildly dyslexic, worked hard to maintain a B average. When he landed at Tabor Academy, schools including Boston University and Harvard were recruiting him.

He told the Nobles audience that two factors helped him meet he goals he set for himself—both before and after the accident. First, he said, “You’ve got to have desire.” Next, he said, you need pride. He defined pride as knowing that you tried your best and having reason for self-respect.

Roy remembers saying to his dad, as he lay on the ice unable to move, “I’ve made it.” He acknowledged to himself and his family the fulfillment of a dream just as he recognized that his reality was about to change. After months in hospitals where he was on a ventilator, suffered from pneumonia and had a metal plate inserted into his neck for stability, Roy emerged. But he acknowledges that he had dark moments when he was unsure what the rest of his life might look like.

“I do believe that we all have an inner spirit,” he said. He reiterated that love, pride and respect were what made and kept him successful and remain core to his life. He urged students to make respecting others the default and to look beyond the labels and see the person. “Give [them] respect from the start. Hear each other out. Thank God we’re all different—don’t be so quick to judge.” He asked students to have compassion and see the person in front of them—to ask a physically disabled person whether he or she is comfortable discussing their challenges, for example.

Roy also urged to students to be expressive in their love of family, friends and romantic partners. “Let the people you love know. It doesn’t have to be saved for a special occasion.”

Hug them, he said. “It’s the first thing I’d do if I got out of a wheelchair.”