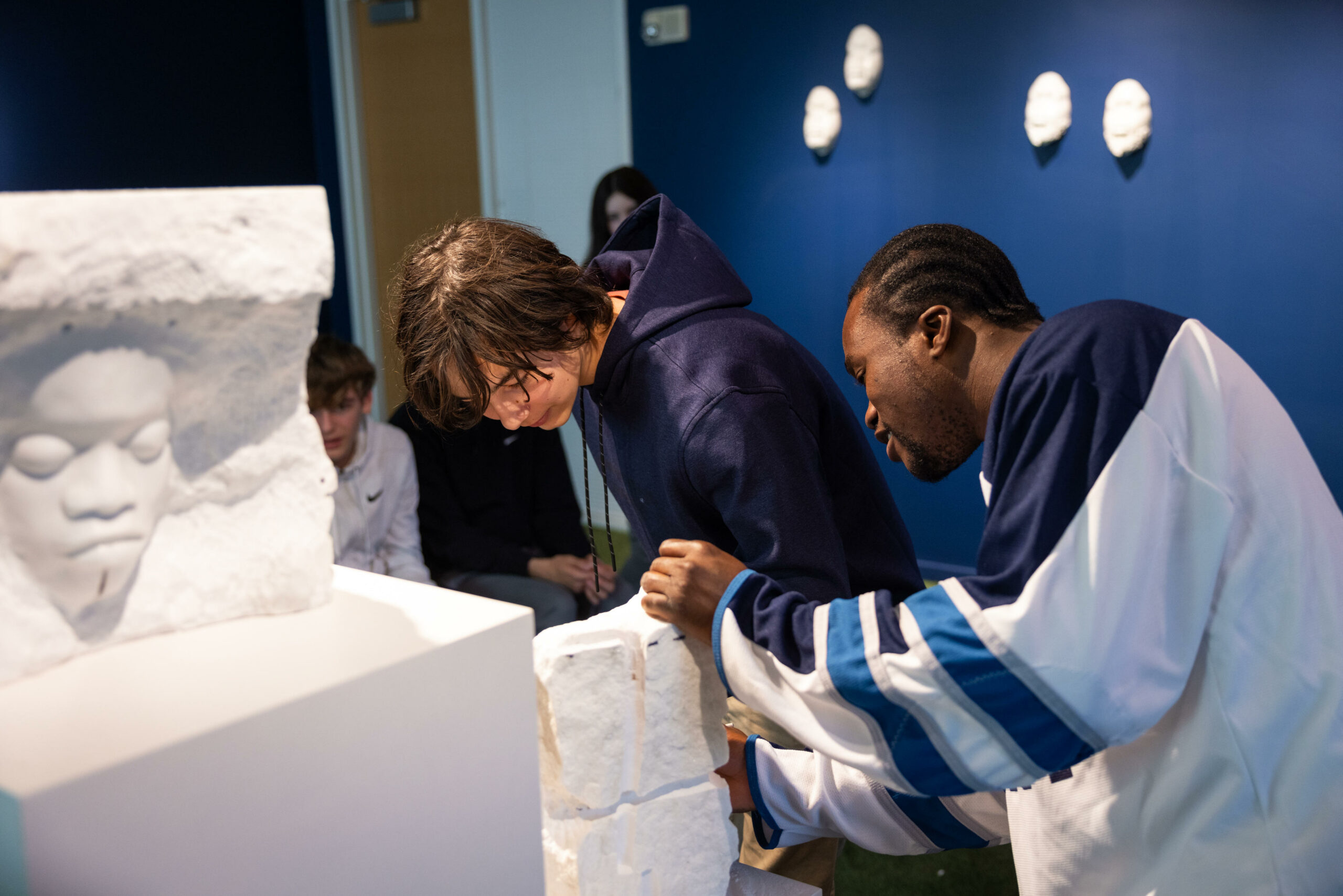 After graduating from Nobles, Hamzat Raheem ’13 took a different route than most of his classmates, attending art school at Cooper Union in New York City and going on to study sculpture at Kyoto Seika University in Japan. “Although I felt somewhat underprepared when I first got to art school,” said Raheem, “I was confident in the work I had put into forming my identity as an artist at Nobles. This confidence carried me through my undergraduate and graduate studies. I was honored to be invited back to Nobles for the first solo exhibition of my career and was delighted when the opening reception turned out to be a mini reunion.”

Raheem explained that the goal of his recent show at Foster Gallery, “Varsity Artist,” was not only to show his work, but to “create a space to discuss the position of visual art within the structure and culture of Nobles at large.” In late February and early March, Foster Gallery was reimagined by Raheem, who asked that the walls be repainted in a Nobles blue and that wall-to-wall turf be laid down as flooring. Raheem hung multiple sculpted faces inspired by his initial piece, “Black Face White Stone,” which involved Raheem taking a life mask of his own face and then transferring it to stone. Since then, Raheem has been creating a collection of plaster castings of faces—many of them the faces of Nobles graduates—and in “Varsity Artist” he displayed these faces at different heights along the blue walls of the gallery. For the finished product, Raheem removed the nose from the faces and then smoothed out the surface.

While at Nobles, Raheem always felt that there were options for him on the athletic fields, but that the same was not true for studio art. “Varsity Artist” created an opportunity for conversation around the idea of bringing visual arts into the fold of the afternoon program. While performing arts have a well-established place in the program, Raheem wanted to open up a conversation about the absence of visual arts offerings—drawing, painting, sculpture, ceramics and photography—at the same level outside of the academic day. “At the very least,” said Raheem, “I hope to have emboldened current student-artists to perceive themselves as ‘varsity artists.’ At most, I hope to have conveyed to the entire Nobles community that I think a visual arts-focused afternoon program at Nobles would be epic.”

One student who found himself particularly emboldened and inspired by Raheem’s work was Thomas Xue ’25, who explained that Raheem’s masks symbolize “culture, family, the history of art, friendship, and so much more.” Xue explained that while he has seen many shows in Foster Gallery, he was struck by how much he could personally relate to Raheem’s work, explaining that it resonated with him “because of the many values and meanings the masks carried along with them.” In Xue’s opinion, “the most interesting thing about the gallery is how multilayered it is, and how every time I walk into the gallery I could discover something new.” He also found himself fascinated by Raheem’s artistic process. “To make a mask,” explained Xue, “the subject must have a great deal of trust in the artist, for the subject could neither talk, see, or even move. So every single mask he makes represents a new meaningful connection he has created.”

While the logistics around incorporating the visual arts into the afternoon program at Nobles remain somewhat challenging given the already packed schedules of Nobles students, Raheem was encouraged by the conversations that he had throughout his show. He recalled one student in particular who had always felt some insecurity around being an artist at Nobles, but after speaking with Raheem and discussing the concept of the “varsity artist” now feels confident enough to share his art on his Instagram account. For Raheem, seeing the show’s impact on current students within such a short span of time was very meaningful.

Raheem had hockey jerseys made for students with the words “Varsity Artist” printed on the front in lieu of “Nobles Athletics.” Every now and then, students can be spotted around campus in their jerseys, continuing the conversation that Raheem started.

Now back in his own studio, Raheem is busy working on his next long-term project, inspired by the conversations he had while on campus. The goal? A life-size stone sculpture with 1,000 faces. Additionally, he is working on a proposal for the Museum of Fine Arts that would involve using a 3D printer to scan sculptures from the museum that are already missing their noses and recreate them in his own style. Raheem’s show sparked important conversations in the community and emboldened students to embrace their identity as artists. Students, faculty, staff and graduates will all be watching for Raheem’s next accomplishment.