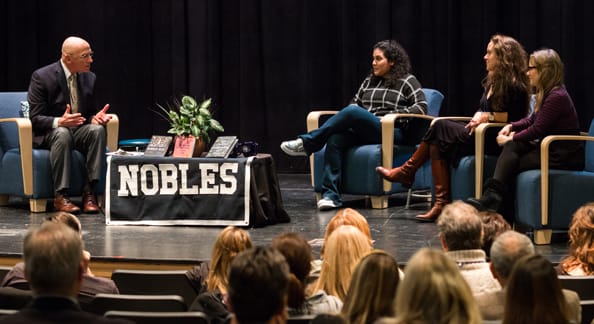 As the three authors introduced themselves, they described how their unique identities influence their works. Farizan introduced herself to the crowd, “I am Iranian American; hi. I am gay; hi.” Farizan’s If You Could Be Mine and Tell Me Again How a Crush Should Feel present characters with identities as complex as her own. Haydu’s OCD Love Story explores mental health issues, inspired by her own anxiety. MacLaughlin, author of Hammer Head: The Making of a Carpenter, described the desk job that inspired her interest in carpentry, “All of the hours of my days were spent in front of a computer screen, with the white noise of the internet washing over me.” However, carpentry posed a new challenge to her identity: “In dirty, ripped and painted clothes, I had a hard time locating my femininity, and even realizing that was something I wanted to hold on to.”

Farizan began writing for three reasons: “1: To make myself feel better. 2: To create books that I would have wanted as a kid. And 3: To challenge myself.” Echoing Farizan’s motives, Haydu described reading letters from people who have been helped in some way by her books. “I try to hold on to that, like ‘that’s enough. This was really hard for me; it was made easier for you somehow. That’s enough.’”

The writers all agreed that self-doubt can be the greatest challenge for any writer.  “The voice in my head is harder than voices of other people,” Haydu said. MacLaughlin agreed, saying that writing involves “this ongoing battle of crushing those voices down.” Occasionally, she succumbs to those voices, thinking “No one is going to care; I don’t even care.”

When audience member Adrianna Brown ‘16, confessed her own interest in writing and asked for advice, Haydu shared her hard-won lesson: “Rejection doesn’t mean anything about what will happen later, it’s just about the right now.” Farizan offered another up side, “The great thing about being a writer, is that you have to live a lot to write.”

All three writers agreed that Nobles provides a great environment for the cultivation of creative minds. Although Farizan struggled with her sexuality throughout high school and waited until after graduation to come out, she said, “Everyone knows everyone here and there are great relationships that helped build my confidence,” which she explained is necessary when facing the inevitable moments of rejection or doubt. “It was great to have people who ‘got it.’” Haydu said the Nobles habit of “saying ‘yes,’ academically and creatively” encouraged her experimentation, like with the magical realism in her upcoming novel The Careful Undressing of Love. MacLaughlin praised the teachers who were open to learn from their students, the teachers who “met you on your level.”

After discussing the many challenges of writing, Baker asked, “Where is the joy?” MacLaughlin described “the sheer joy of putting words together” and Haydu told about those moments, about twice a year, where her drafting finally all makes sense. “That moment of epiphany is just really beautiful. It’s thrilling to have those childlike moments as an adult.”