The Nobles alpine ski program consists of boys’ and girls’ varsity and junior varsity teams. We compete weekly against eight other ISL schools, each squad vying for the league championship in this season-long competition. We also participate in the highly competitive Class A New England Championship field, skiing against 14 other schools located across the region.

Working hard, improving one’s racing and having a lot of fun are the three most important goals of our program. In doing so, we hope that each racer develops a consistently strong work ethic, approach and attitude towards their skiing and racing. Although we face altitudinal as well as latitudinal challenges in eastern Massachusetts, we feel that we offer an incredibly focused, productive and successful program, nevertheless. We are open to accomplished free skiers looking to learn how to race as well as to those who have already raced for many seasons and are looking to get more on-snow time during the week while experiencing team racing.

The team usually numbers 12 girls and 12 boys, with seven of each gender racing varsity and five racing JV. The strongest four finishers’ place points are added together and counted to determine team placing in the varsity race and each school’s top three finishers are counted in the JV event. At the New England’s (NEPSAC’s), each varsity team enters its top five racers in both giant slalom and slalom and counts its top three finishers in each discipline, standings again determined by adding the three placings together.

Before the snow flies, the team works out with the strength and conditioning coach, spins, plays soccer, team handball and Ultimate. We do tucks, we review best ski tuning practices, we hold the Wall Sit Championship of the World and we do snow dances encouraging Ullr to come to New England early and often. The on-snow portion of the season usually kicks off with our holiday camp, held either before Christmas or after New Year’s depending how the calendar falls in a given year. The team spends three days on snow, free skiing, doing drills, and training in gates. Venues used the past few years have included Cannon, Waterville Valley and Okemo. In early January, the second semester begins and everyone is psyched to begin the competitive portion of the season. 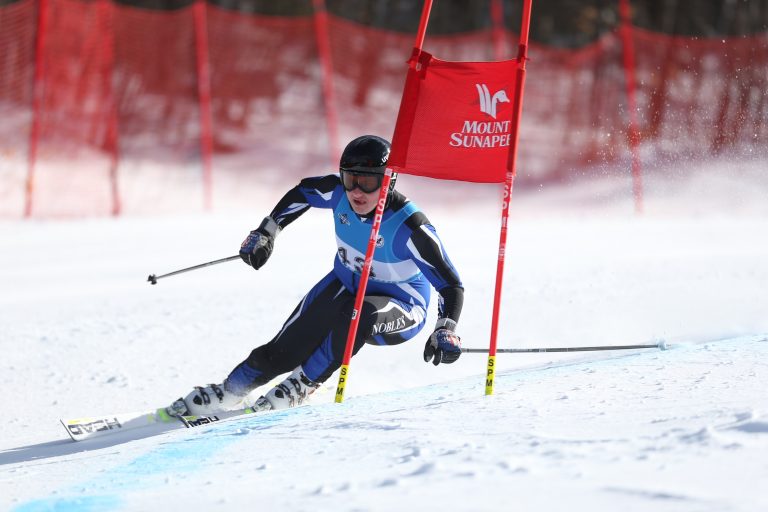 The team has a dedicated room in the Morrison Athletic Center (MAC) with ski racks, cubbies for each athlete’s gear, a video monitor for watching training and race runs, three sharpening stations, two waxing stations and two scraping and polishing stations.

Beginning in early January, on Mondays, we have a study hall for all racers in Classes III-VI from 3:20-4:20 before heading out to train at Nashoba Valley (or Pats Peak on occasion) from 6:00-7:40. We are back on campus around 8:30 and we make a stop at Tracey’s Gas Station on Rte. 2 in Lincoln en route for those racers living north and west of school who prefer to get picked up there.

On Tuesdays, the team stays on campus and does a rotation consisting of a workout (cardio, plyometrics, yoga), video review and ski prep. Afterward, there is an optional team dinner and the team is usually back on campus by 6:15.

On Wednesdays, we race each week at Nashoba, leaving campus at 2:00 and returning by 6:15. These races usually start at 3:10.

Most Thursdays and Fridays we train in the afternoon at Blue Hills. On those days we will return to campus by 6:00 and those participating in organized USSA race programs on the weekends are exempt from Friday training sessions. The Fridays before the two long winter holiday weekends (Martin Luther King and Presidents’) are also no-practice days for the entire team.

Head Coach At nobles since 1994

Fred Hollister taught at Nobles for 24 years until his retirement in 2018. He continues to coach the ski team having just completed his 25th year at the helm. Fred raced USSA at Mad River Glen during high school and continued to race on the alpine team at Bowdoin for four years, captaining the team his senior year.

Assistant Coach At nobles since 2017

Brett is a former US Team men’s and women’s coach and a former World Cup racer. He has also been a Division I college coach and ski academy head coach.